In the autumn of 2013 I participated in the Himal Race with the aim to to better than the 2010 edition where I finished second. One of the major obstacles that the participants face, is the high elevation at which the race is run. One of the things I tried in my preparation was sleeping in a hypoxic tent to simulate the altitude and hopefully be better acclimatized from the start on.
When I told this to Ellen, she was interested to know what the result would be and eager to use me as a guinea pig. We decided that she would regularly take blood samples for analysis. Because information wants to be free, I decided to make the results public. You can find them below.
Keep in mind that this is just a N=1 sample. If you draw serious conclusions from those results alone, you are crazy. Also, it is impossible to attribute the cause of eventual changes to the tent based on this experiment.

A picture is worth a thousand words, so I start with a graph summarizing the results. 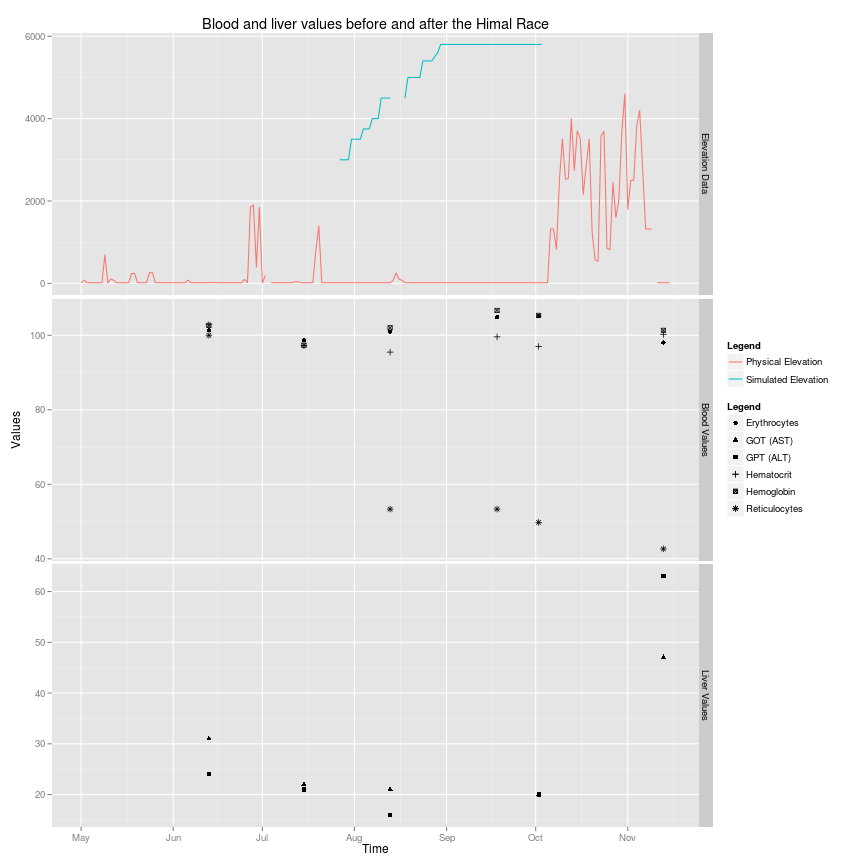 Let’s take a look. First of all, the way I (ab)used the tent. My goal was to perform at high altitude (>5000m), while most of the research that I am aware of focusses on using a hypoxic tent to perform at sea level. So basically, I had no clue what would be the optimal way to use the tent. As you can see (blue line), I started at the end of July at an oxygen level of which I know it poses me no problems and gradually increased the simulated elevation during one month. Afterwards I stayed at that level. Because I prefer pushing things too far over not trying hard enough, I decided to stop only when I started having troubles sleeping. Which never happened. According to the manufacturer specifications the maximum reachable elevation is 6400m. I, however, was never able to push the tent beyond 6000m. So, I stayed slightly below 6000m for over a month. Not the normal way of using such a tent, indeed.

For the blood samples, we took a total of six samples. Two were taken before sleeping in the tent to provide a reference value. Three were taking while I was sleeping in the tent and one was taken shortly after my return from Nepal. Samples during the race would have been very interesting, but that was realistically impossible.
We were of course mainly interested in the influence on the oxygen capacity of the blood. In the second panel you can see the evolution of hematocrit, hemoglobin, erythrocytes and reticulocytes. Because they are measured in totally different units and have totally different order of magnitudes, I have normalized to values where 100 equals the average of the first two measurements. Be careful: the axis doesn’t start at zero, which exaggerates the size of an eventual effect.

Most people are interested the hematocrit (the percentage of the blood volume consisting of red blood cells). My hope was of course that this would increase. The story is simple: I don’t see any influence.

Fortunately, both hemoglobin (the oxygen carrying protein in red blood cells) and erythrocytes (the number of red blood cells per blood volume) increased nicely while I was sleeping in that tent. That is where I hoped all the good would be coming from.

The story is different when we look at the reticulocytes (the number of immature red blood cells per 1000 red blood cells). I expected that would increase because of sleeping in the tent. But against my expectations it decreased a lot. On the other hand, the number was very high in the reference period and unfortunately I have only one value from the reference period. But I don’t really understand what happened there. It might be the reference value that is anomalous.

In the third panel you can see the results of some liver tests, namely GOT (AST) and GLT (ALT). Both are expressed and plotted in U/l and again the vertical axis doesn’t start at zero. We used this as an indicator for muscular damage. As wikipedia (not the most reliable source, I know) puts it “[...] and ALT levels can also increase in response to strenuous physical exercise”. Normally they will increase after intensive training or racing periods. Without surprise, they stayed rather stable during the test period. Most of my training was high volume, low intensity. But since I returned they have totally gone through the roof. I think that I know why I feel tired and not exactly in top shape at the moment.

The full dataset and a text file with some technical details is available here (zip-file containing csv and txt; 3.1kB).

From the 2010 race, I knew that I respond rather well to high altitude. So it is no surprise to me that I had no problems with altitude sickness. Never had. During the race and especially in the early stages, the oxygen saturation was measured regularly. Each time I had one of the highest values. Like I also had in 2010.
While I think that the tent helped in the acclimatization, the effect was a lot less spectacular than I had hoped. If you want to run high, nothing beats living and training high. Period. I will limit my experimentation with hypoxic tents to this one occasion. For me the ROI is too low. When I go back to the Himalayas, I will invest more in living at altitude beforehand.

The data can be freely used for educational and research purposes. Just cite the source in a way you consider appropriate. If you would publish anything (partly) based on the data, I would appreciate it if you would send me a copy.
For other use of the data, permission is required. If your intentions are honest, you will get the permission but I want to know what you use it for.

I give no advice to how you should prepare races or if and how you should use a hypoxic tent. If you want to sleep, run or do whatever you want to do at altitude or under oxygen deprivation, you do so at your own risk. Don’t blame me if you try something similar and suffer from adverse effects that might range from a headache to dying.

This entry was posted in Geneeskunde, Lopen, Ultra. Bookmark the permalink.

5 Responses to Getting high