The second base vita of the Tor is in Cogne. Runners have covered there 56 km with 4141 D+ since the previous base vita. We have intermediate times in Rhemes and Eaux Rousses.
I will follow the same structure as I did for leg 1. In order to avoid writing the same things over and over again, I will be a bit shorter in the explanations.

Just a while ago, Lionel Trivel passed in 9:48. This gives him the third time in the history of the race and he is about half an hour behind what Iker Karrera ran last year. But he is ahead of what Oscar Perez Lopez ran towards a close finish with Iker.

Fastest times between Valgrisanche and Cogne:

This far it are the same names over and over again.

Fastest times between Valgrisanche and Rhemes:

Rather surprising to see here new names and all the way back from 2010. Lionel Trivel ran this today in 2:27, which will put him on the second place.

That first value looks suspicious. Especially since the runner dropped in Cogne. It probably is the time he dropped, rather then the time he entered Cogne running.
In the whole list, the most remarkable to me is that they only contain runners that eventually finished the race. The ones that still run quickly appear to know what they are doing, while those that took of too fast already faded away. 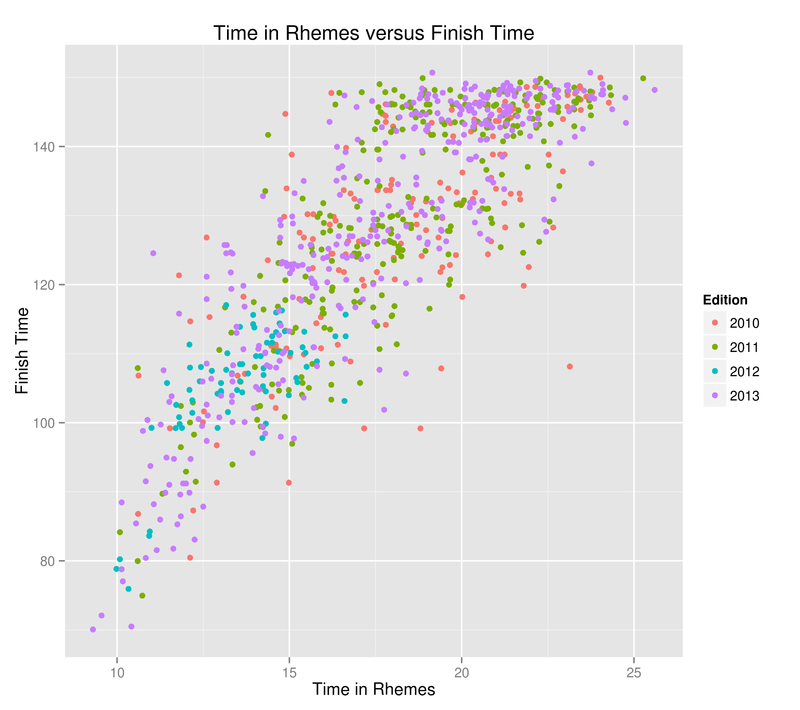 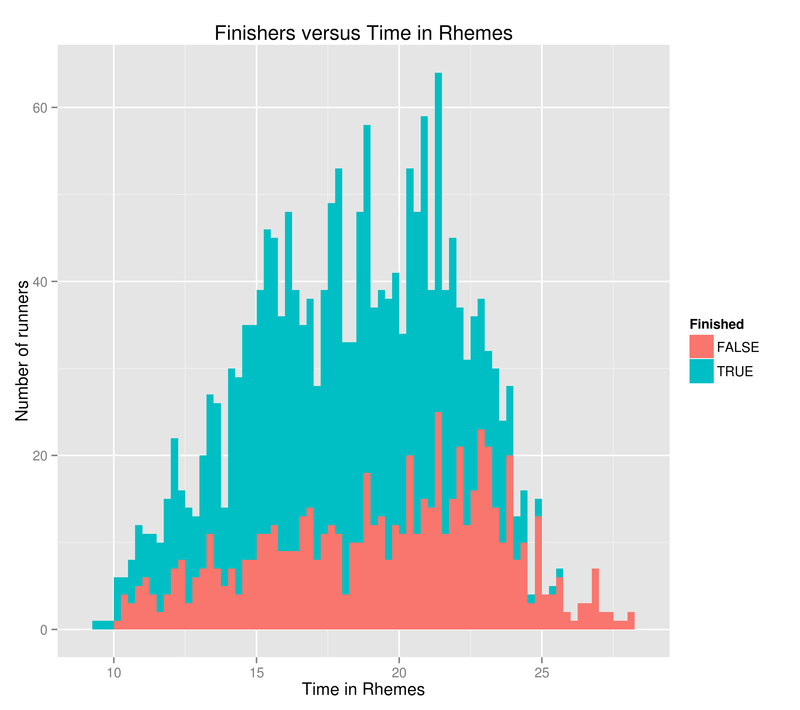 You should pass Rhemes in less than 24 hours. If you don’t manage that, your chances of finishing are very slim. 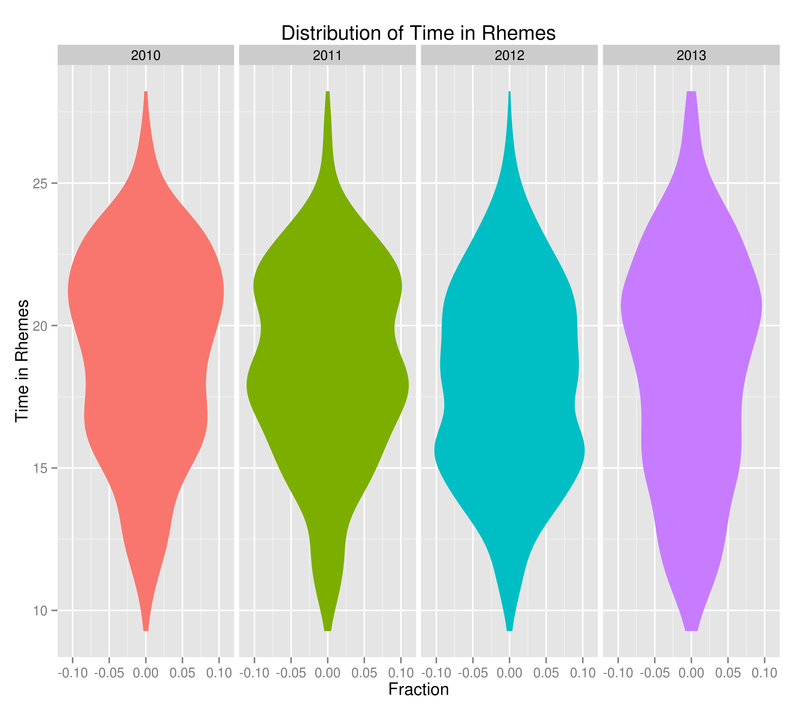 I keep being surprised by how different those shapes look. 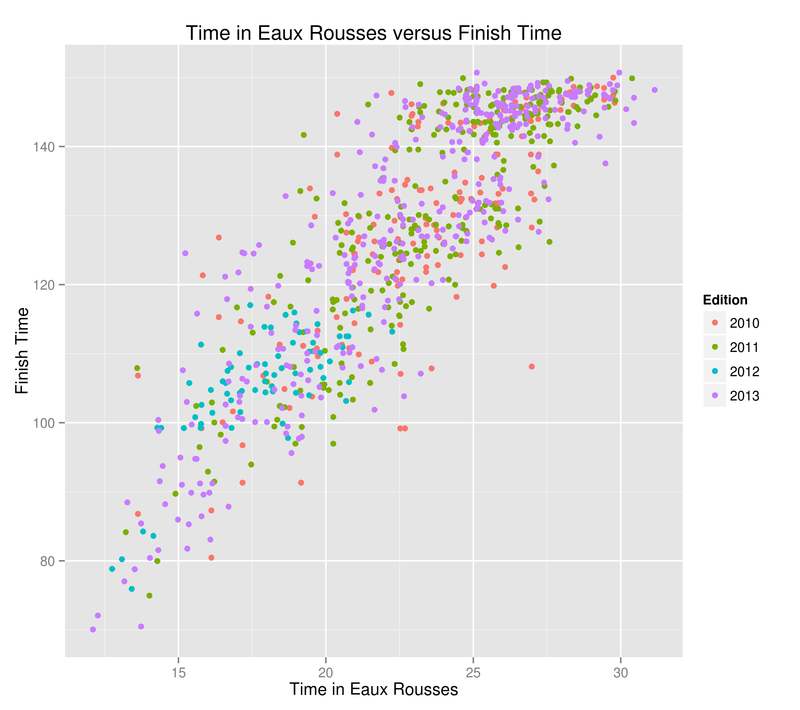 If you are not in Eaux Rousses after 26 hours, you are in for a battle with the cutoffs. 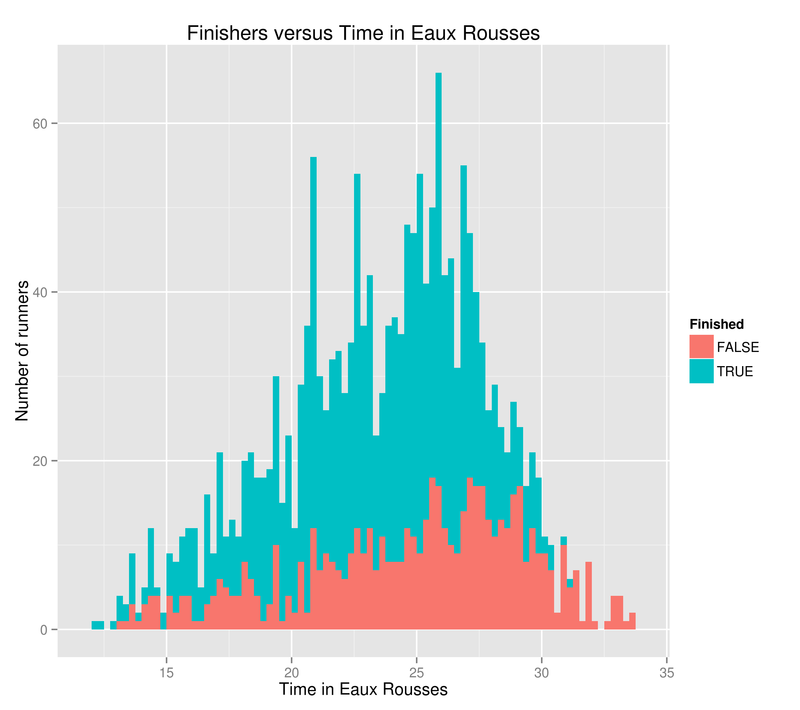 There is a cutoff after 33.5 hours. To have a realistic chance you need to pass in less than 30 hours. 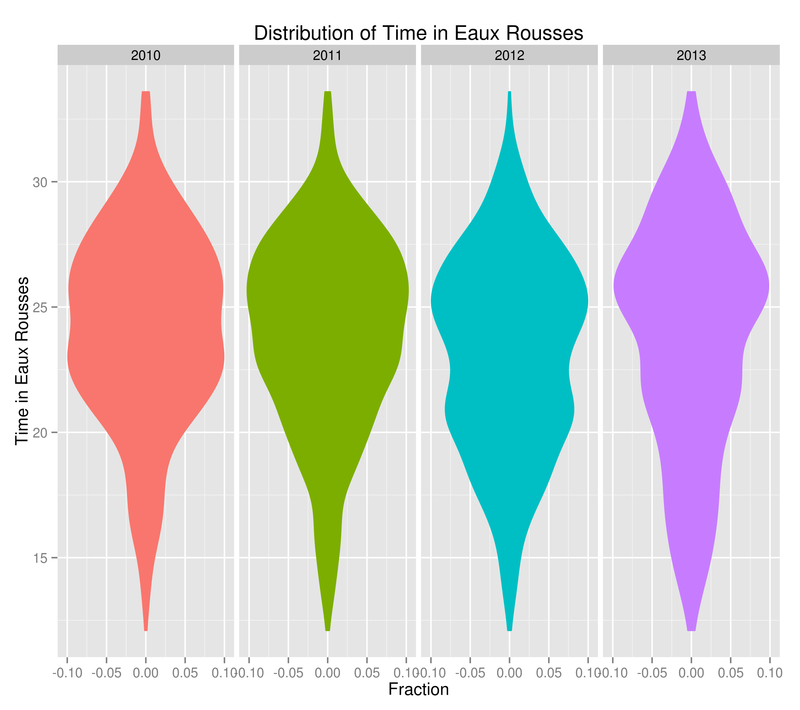 That changes quite a bit from the picture in Rhemes. I still have no explanation for that. 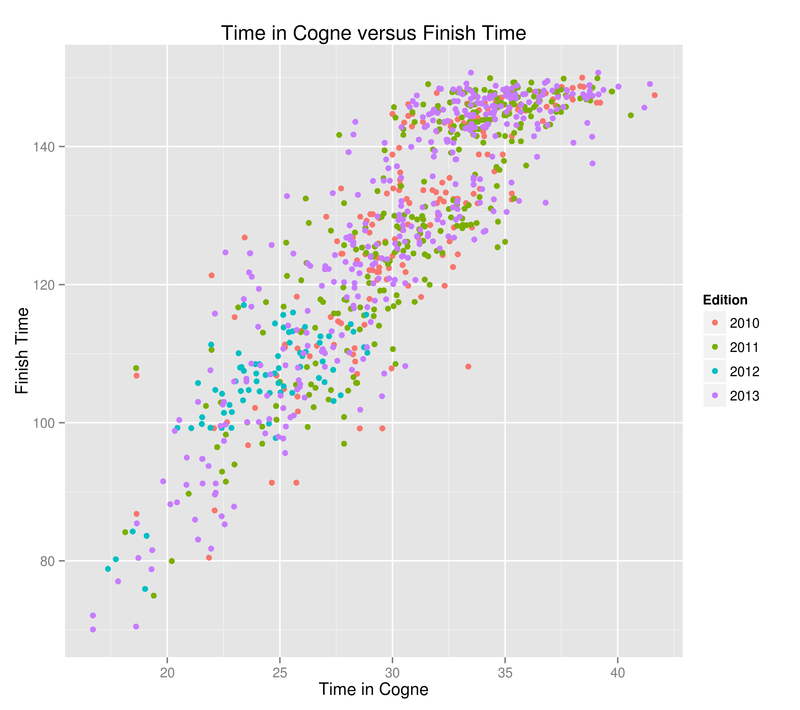 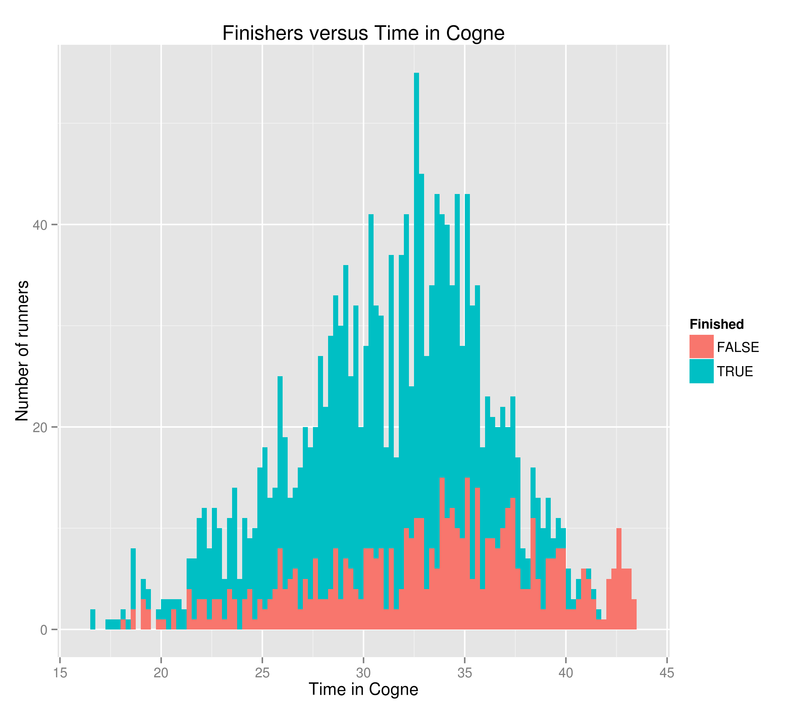 There is a time limit in Cogne after 42 hours. Interesting is the bunch of runners coming in after less than 40 hours and pushing on to the finish. I think that are people coming in before darkness that manage to get some good rest and hit the trails again in the morning. 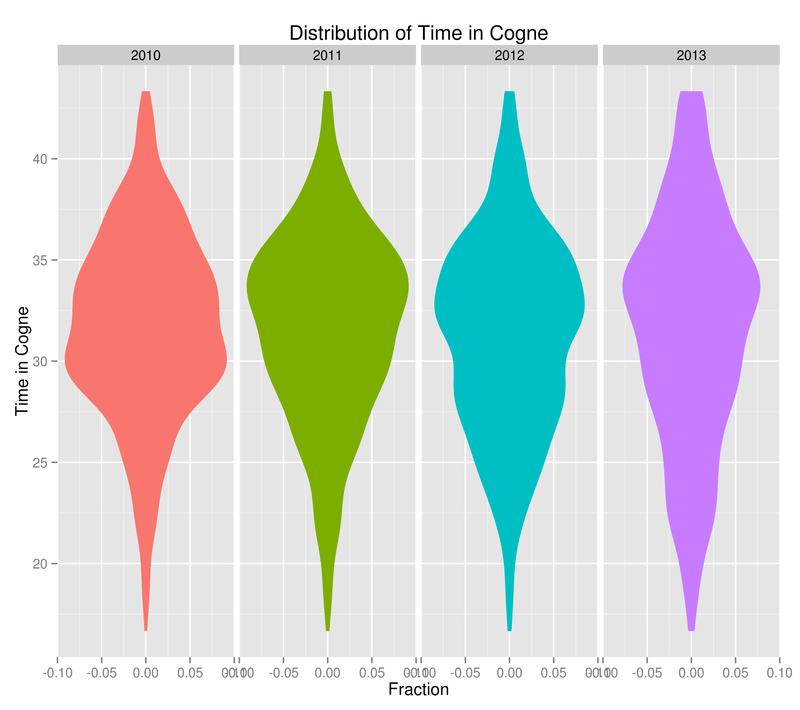 Strange how the main bunch was around 30 hours into the race in 2010, but rather 34 hours in subsequent editions. 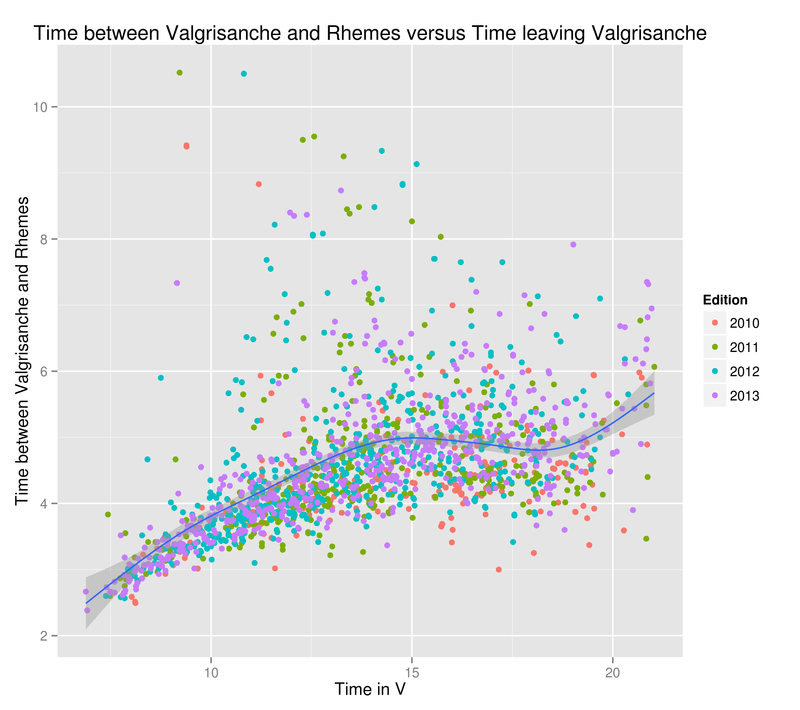 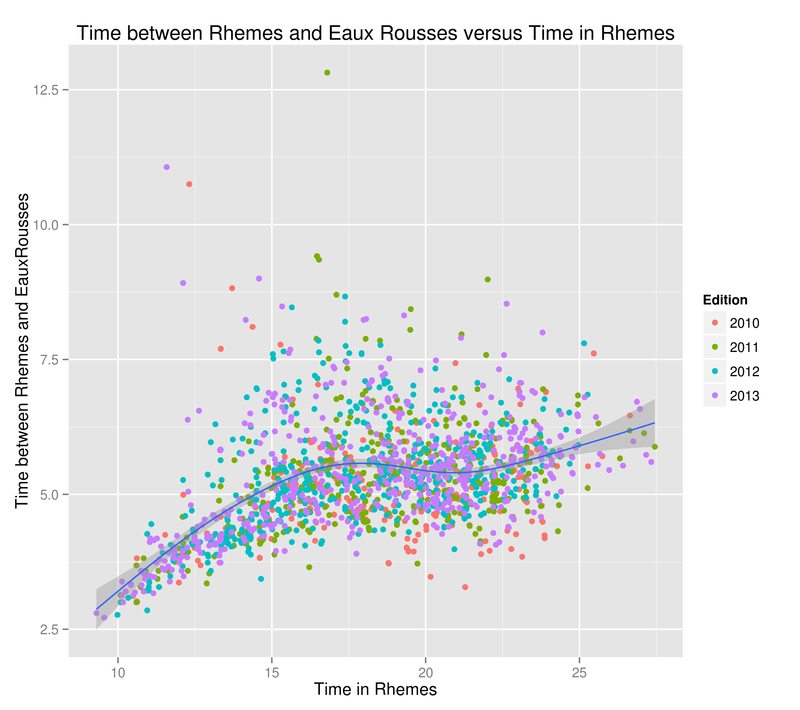 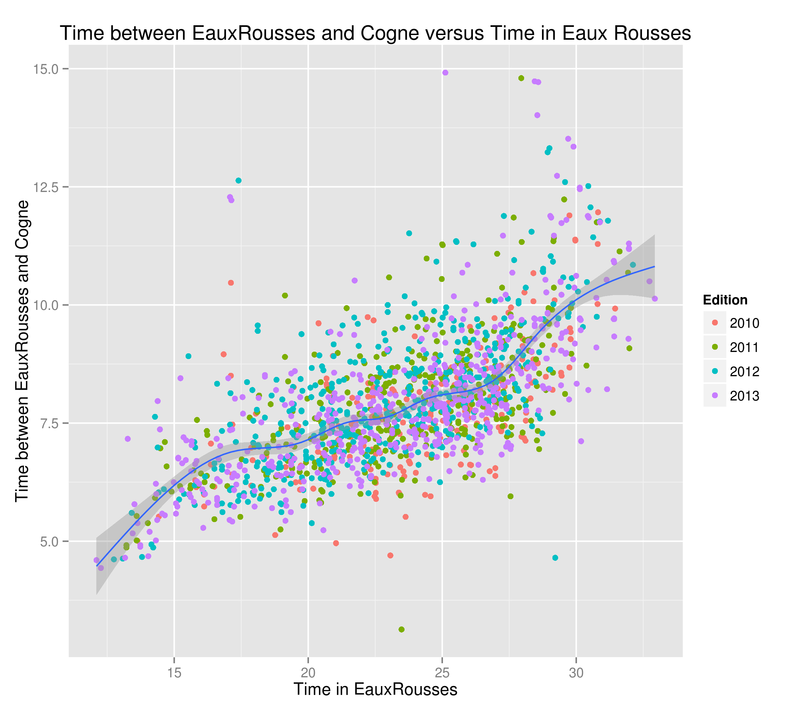 To finish the discussion of leg 2, some more records. This time of the people that stayed in Cogne for the longest time and still finished. 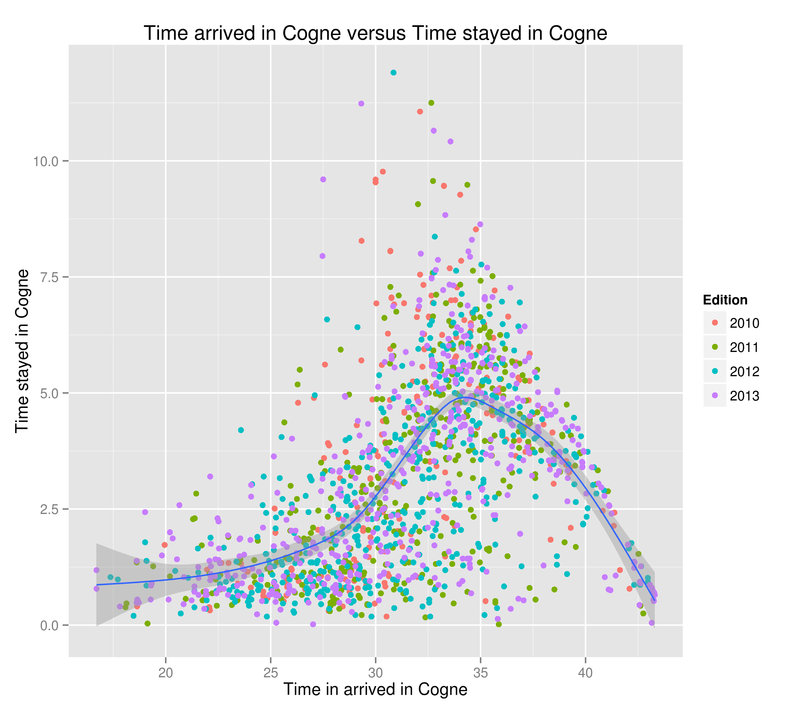 No surprise here. People arriving in the beginning of the night tend to stay for a long time. while people that are fighting the time limit rush back out.