How to kill a dragon? Day 5

Day 5 of the Dragon’s Back Race. The final day. This stage is a bit shorter to allow all those still in the race to finish somewhat comfortably. After a few first legs without obvious choices, the runners enter the Brecon Beacons. Also there the options are limited. Don’t expect too many shocking results from this stage. You need to run quickly. That is about it.

The fastest time was run by Jim Mann with 426.4 minutes.
The median time was 699.7 minutes.
Below are the histograms of the percentage spent over each leg. 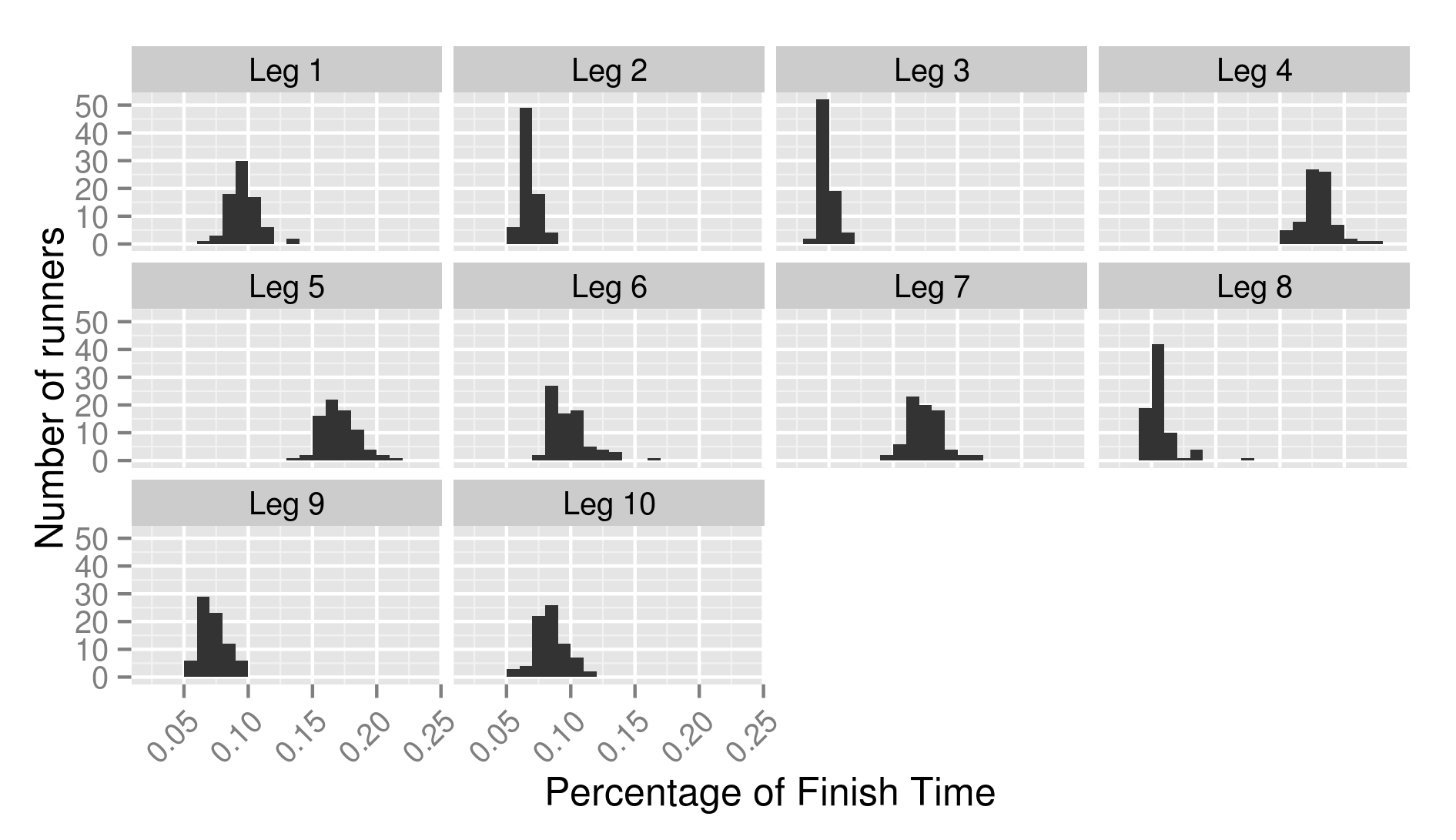 The longest legs are clearly 4 and 5. The runners spent there almost 20% of the stage. 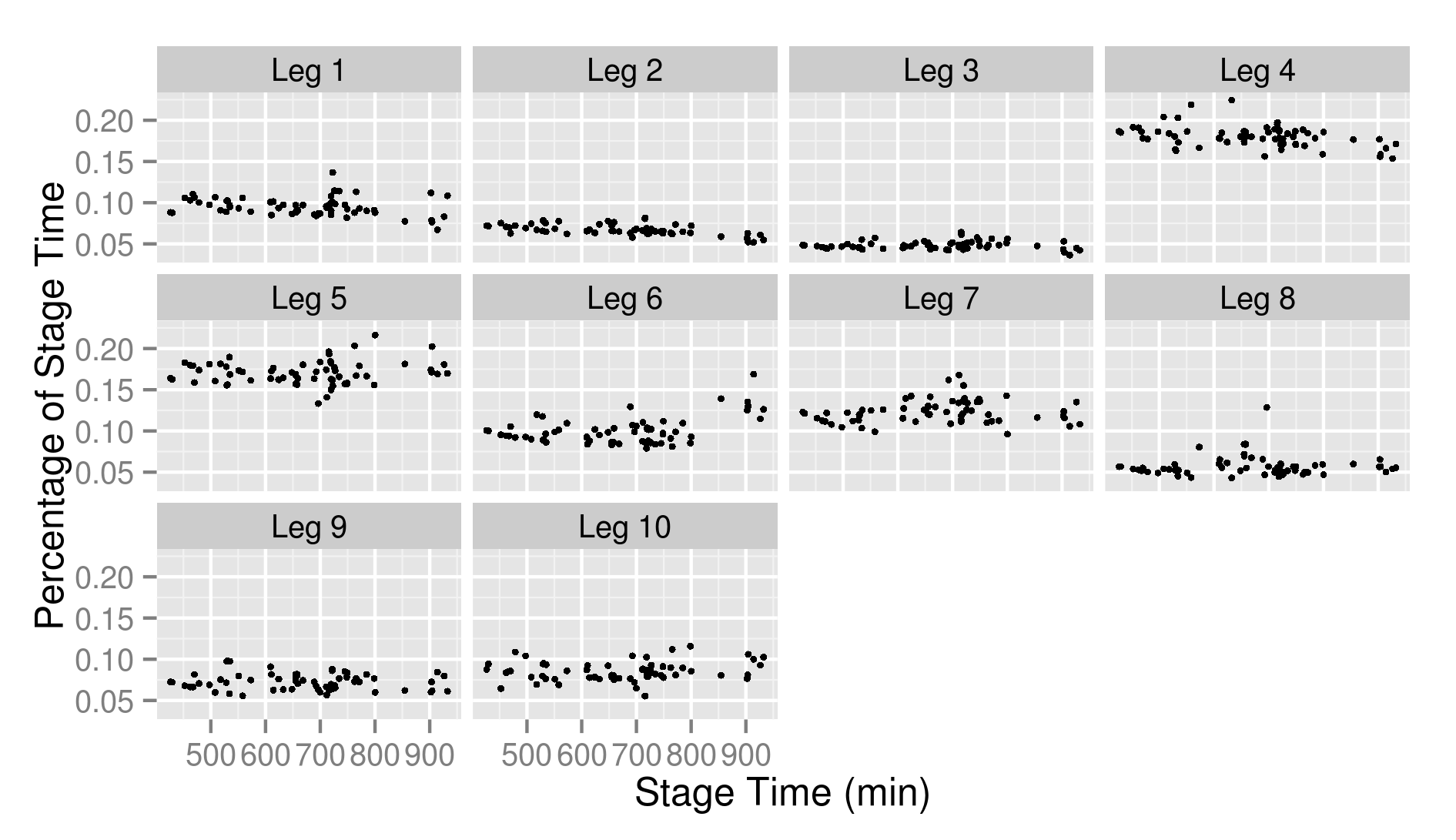 My basic assumption that the percentage is independent of running time looks rather OK here. A quick look on the error bars for the slopes of the regression lines should confirm that. 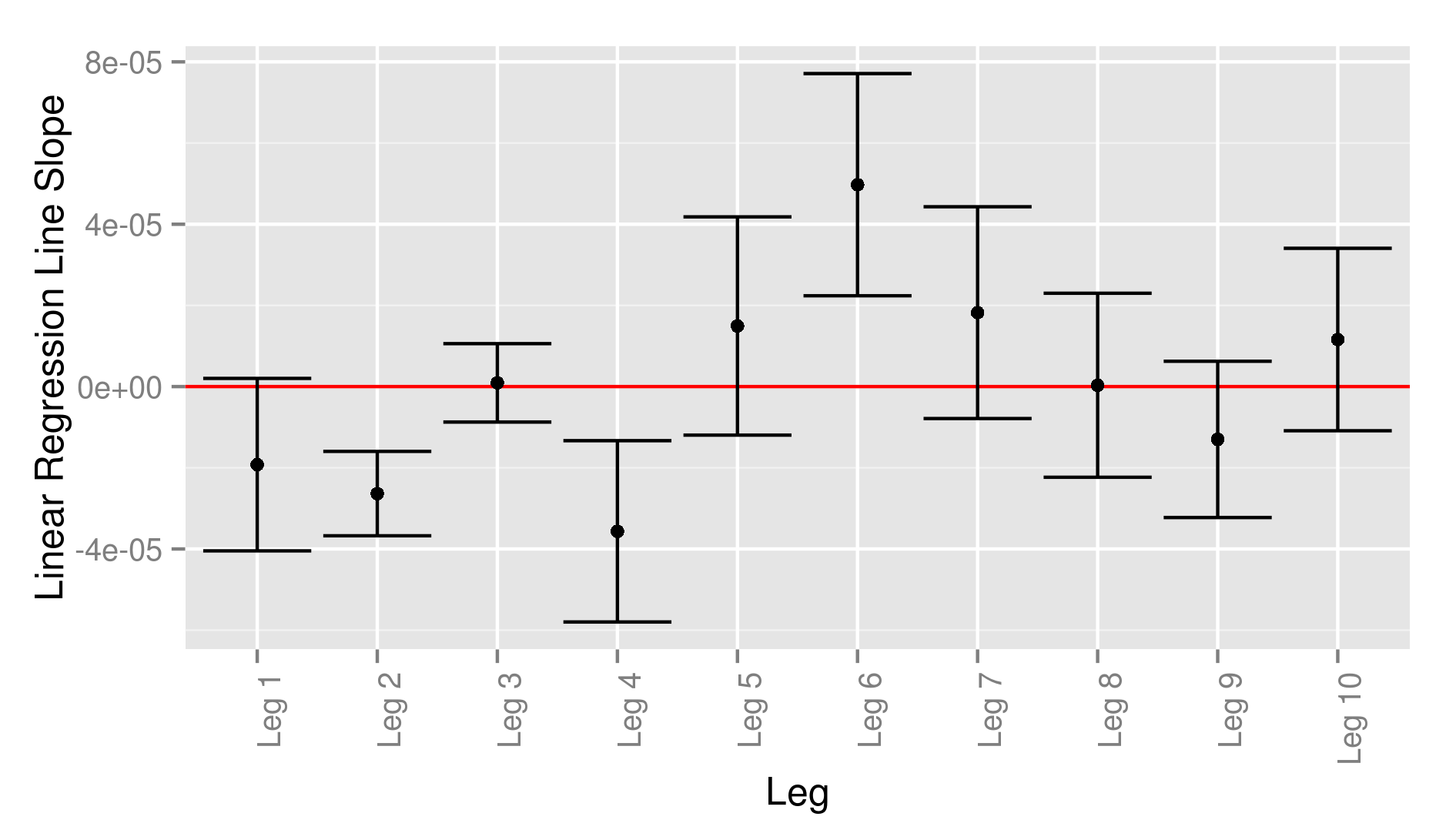 Not perfect, but I can live with that. It is good enough for me.

Just as for the previous stages, I made a set of boxplots. This is mine. 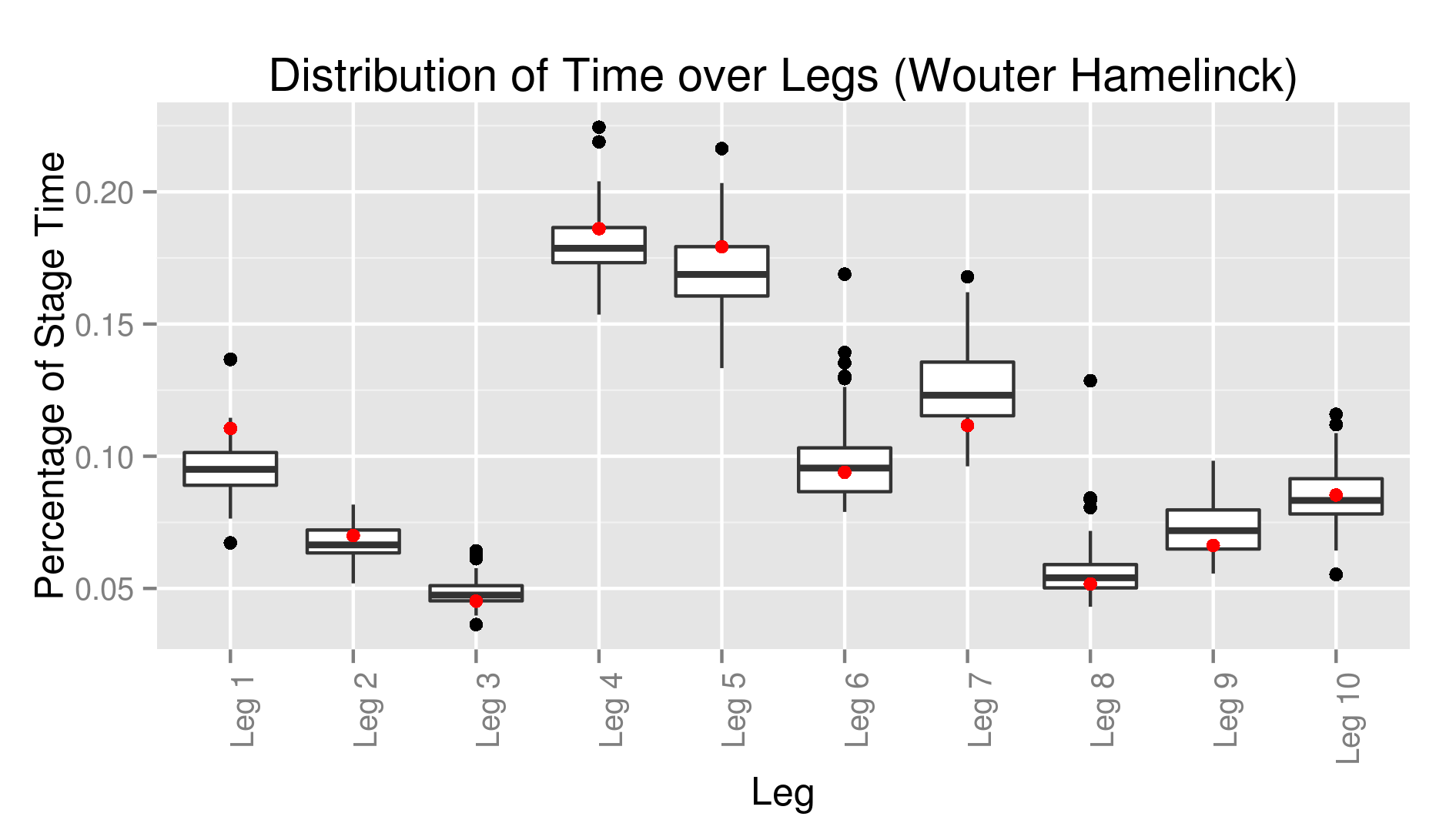 By now you probably got the drill. Again, they are for all runners available in a zip file.

The fastest time was run by Jim Mann with 37.7 minutes.
The median time was 62.3 minutes.
This leg is kind of obvious. Or at least it should be. 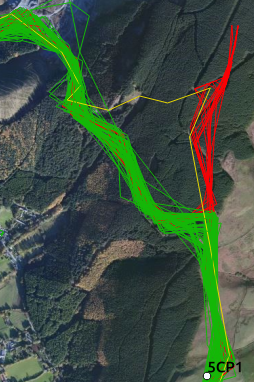 We see that not all runners agreed. Most (67) took the obvious green line. But some (red, 8 runners) thought there would be something very nice to see up north. And one runner (Konrad) made an original choice (yellow). 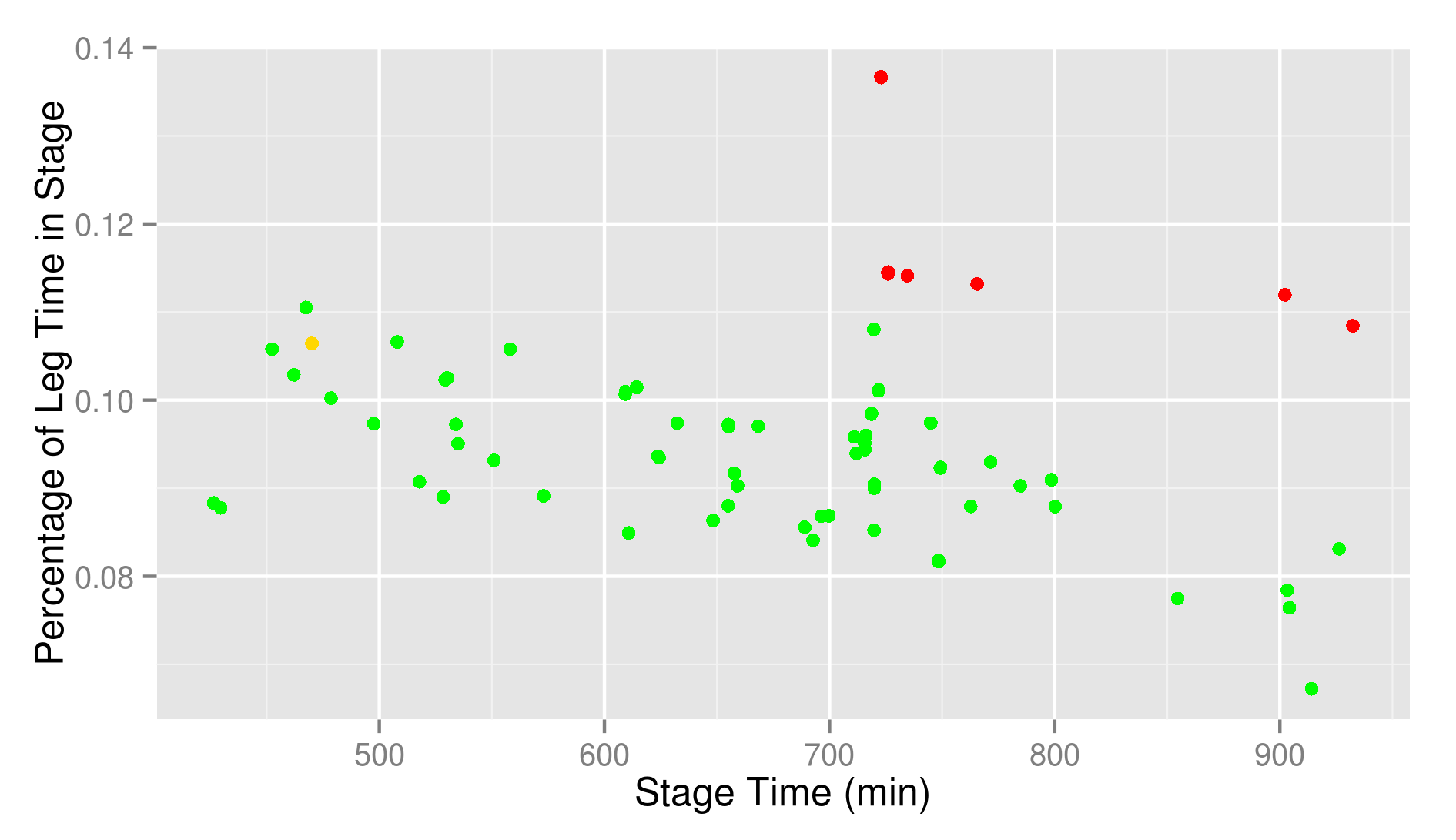 No surprises. Red is getting lost and doesn’t buy you anything.

The fastest time was run by Konrad Rawlik with 29.5 minutes.
The median time was 47.2 minutes.
There are no interesting choices to make.

The fastest time was run by Jasmin Paris and Jim Mann with 20.7 minutes.
The median time was 32.7 minutes.
Also no interesting choices.

The fastest time was run by Jasmin Paris and Jim Mann with 49.5 minutes.
The median time was 123.2 minutes.
During this stage you can make a few choices. 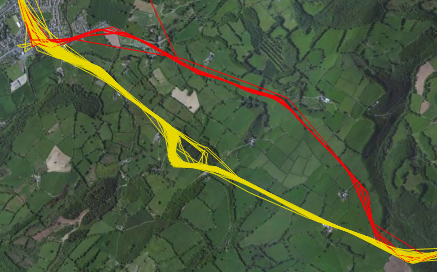 A first big choice comes leaving Llandovery. There are two more or less parallel roads. Either you take the southern one (yellow, 67 runners) or the northern one (red, 9 runners). 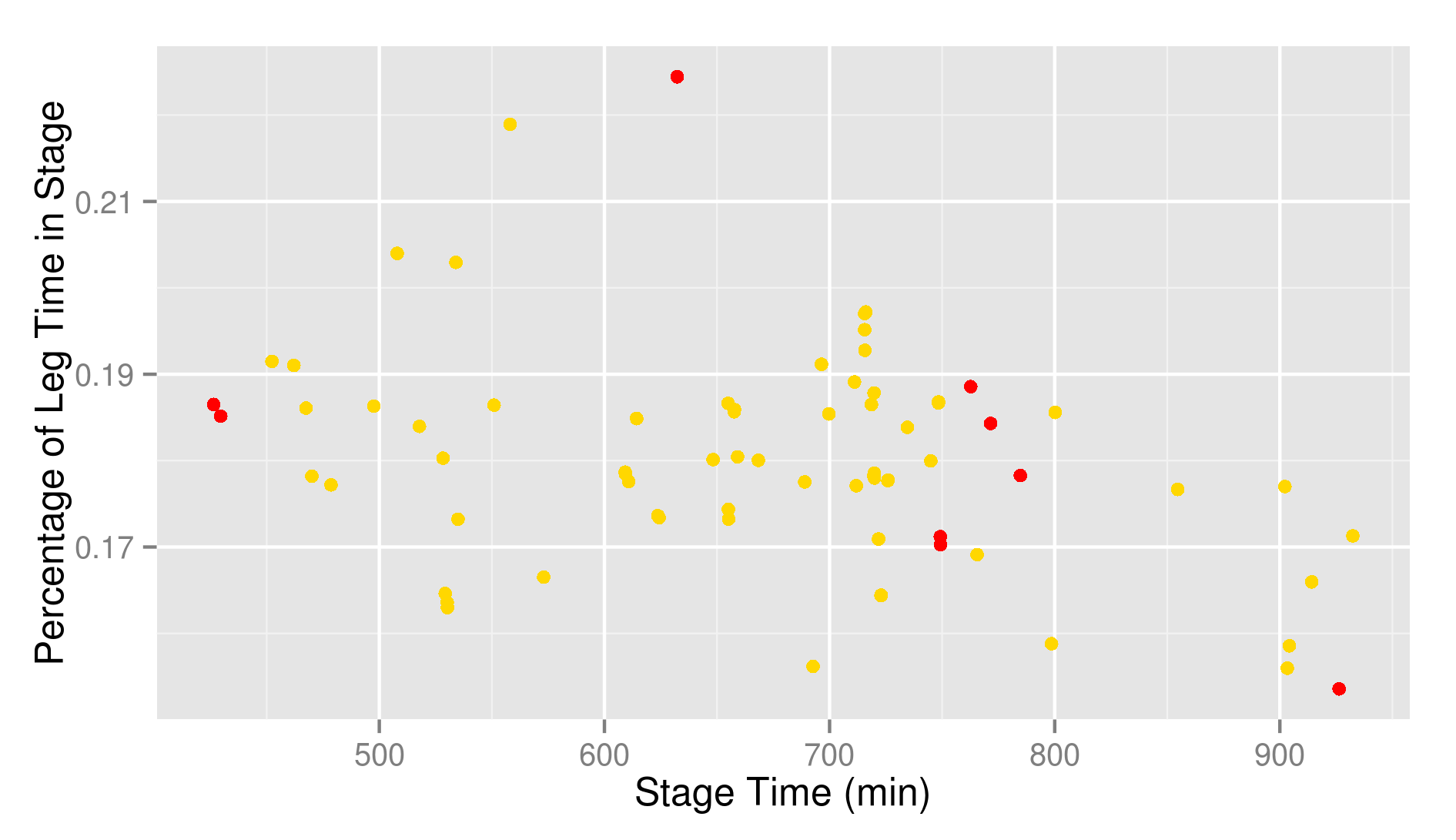 Conclusion: whatever. It totally doesn’t matter.

Then, you can pick a line going over the pass and descending to the forest. 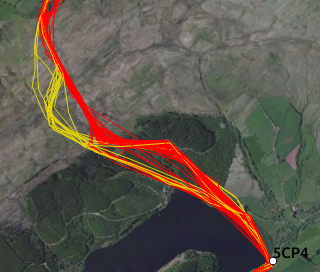 The most popular option is to follow a rather straight line (62 runners, red). Alternatively, some (14) runners made a wider turn to the west. 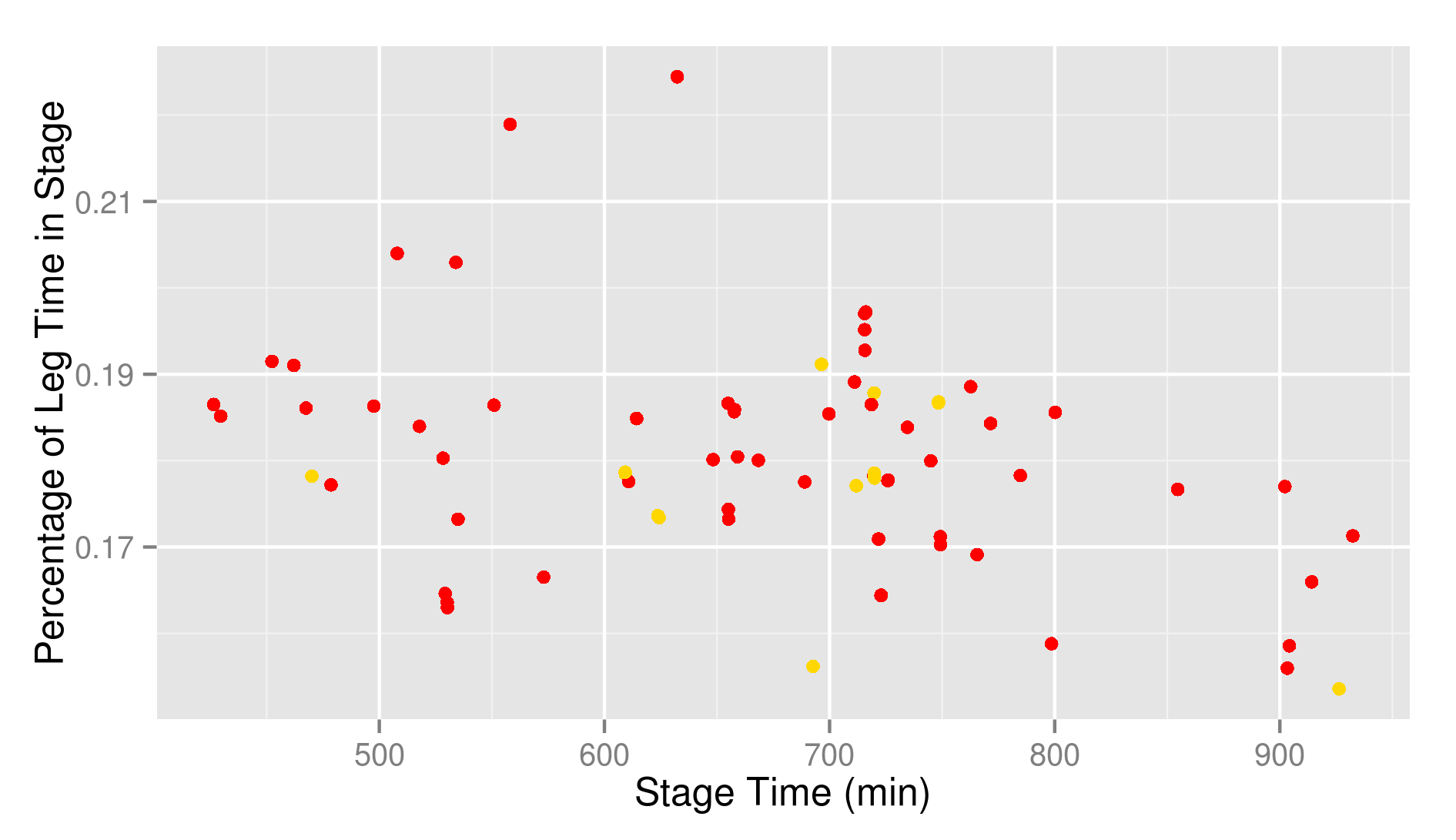 We see again no difference, but here it is certainly possible that any possible effect over this short stretch drowns in what happened over the entire leg.

The fastest time was run by Jasmin Paris with 69.8 minutes.
The median time was 111.7 minutes.
There is no obvious path once leaving the forest and climbing to the ridge. 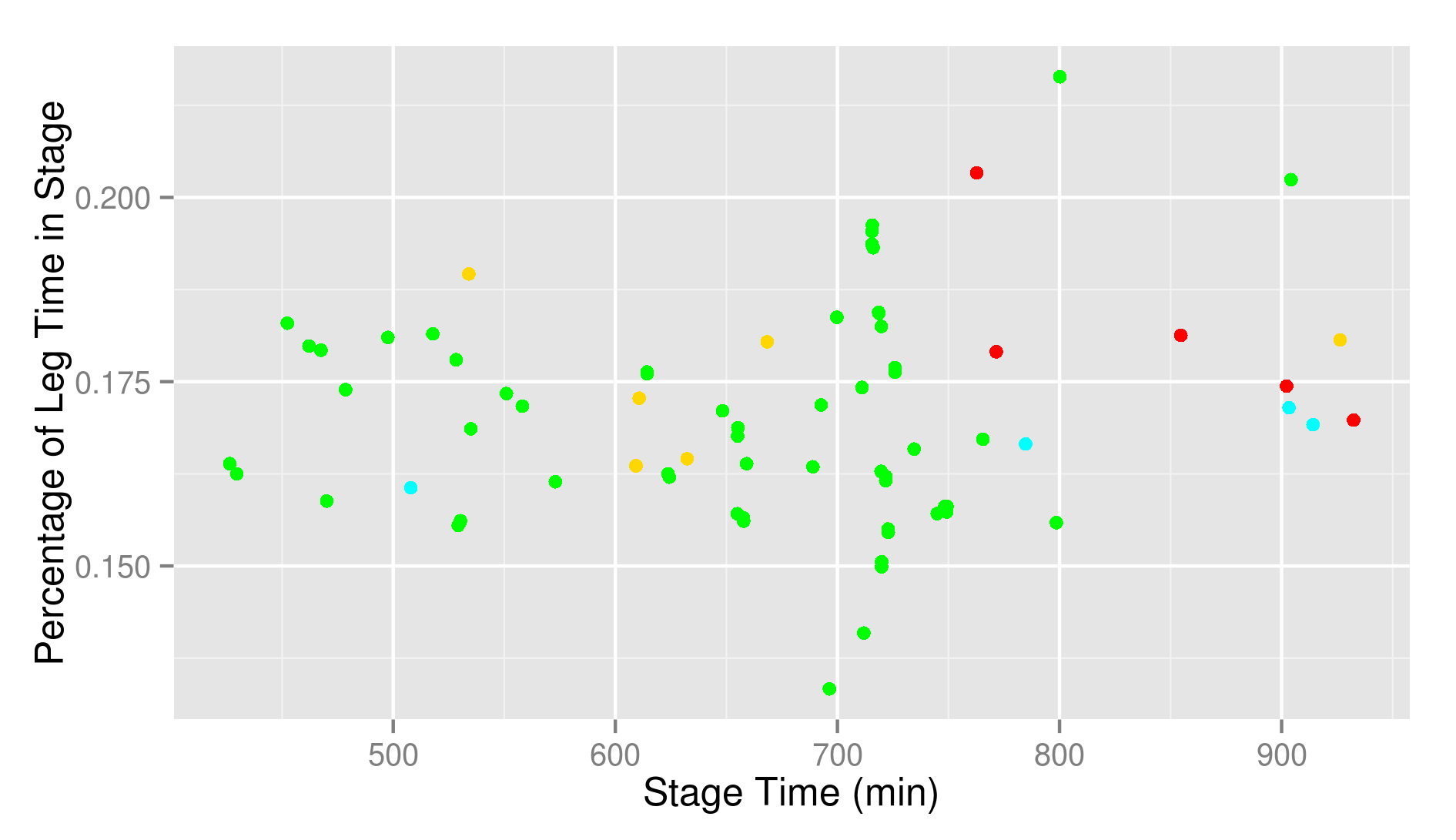 Unsurprisingly, it doesn’t really matter. No line is really fast or slow. Just keep going in the right direction.

The fastest time was run by Jim Mann with 42.9 minutes.
The median time was 62.2 minutes.
From this leg on, you will see that almost all of the runners finishing in less than 500 minutes are on a diagonal line and have the same colour in the scatter plots. This is because they were running together. During this leg you basically run straight east following a ridgeline. For most of the runners a thick fog came up during this leg which made it certainly harder to keep the correct direction. The tracks show a big variation and I classified them in two different ways.

A first classification is how runners passed the summit of Bannau Sir Gaer. This is after about a quarter to a third of the way from CP5 to CP6. From north to south those lines are red (10 runners, passing the summit), yellow (28 runners), green (30 runners) and cyan (5 runners). 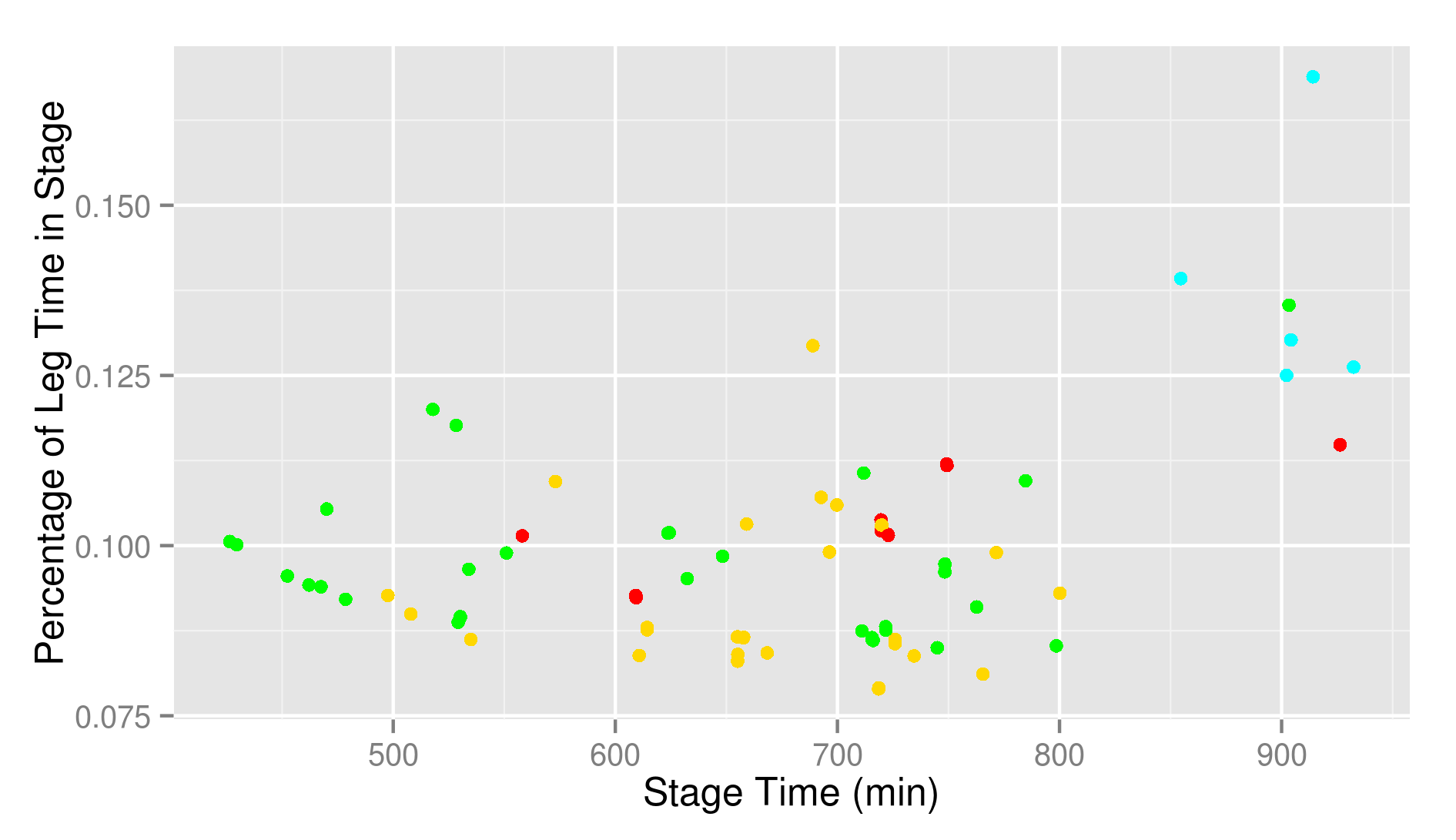 We see that it doesn’t matter a lot. Cyan doesn’t impress me and is probably overshooting to the south. Also red is a bit slower, but might be good if you doubt your navigation a lot. Between green and yellow there is no real difference.
I also looked for the lines that were followed to approach CP6. This second classification was made about two thirds into the leg, basically considering the line used after Waun Lefrith. 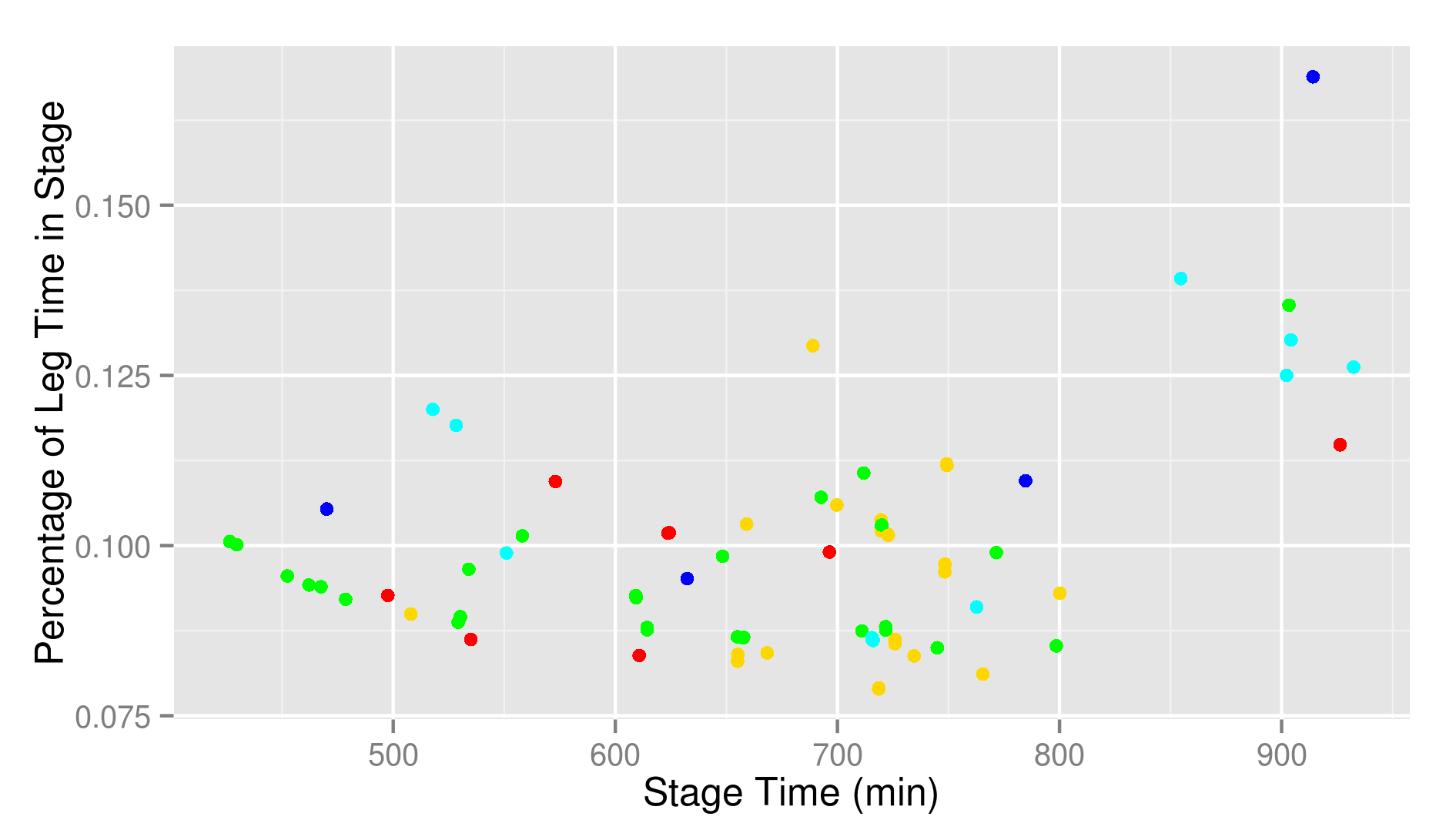 Very colorful, but that doesn’t lear us a thing. The exact line doesn’t really matter. Just keep going towards the checkpoint and you’ll be fine. Among the fast runners we see that Konrad lost some time by going further south than the other fast runners.

The fastest time was run by Damian Hall with 51.7 minutes.
The median time was 85.8 minutes.
During this leg you run first south to the end of a valley before heading west to CP7. Again, many lines are possible as there is no real path. As a starter I will look at the lines used to leave CP6. 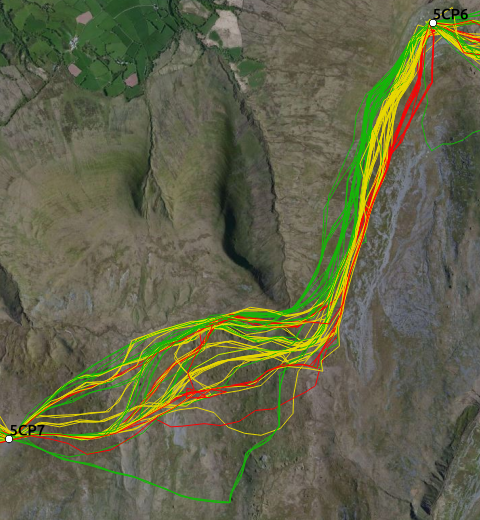 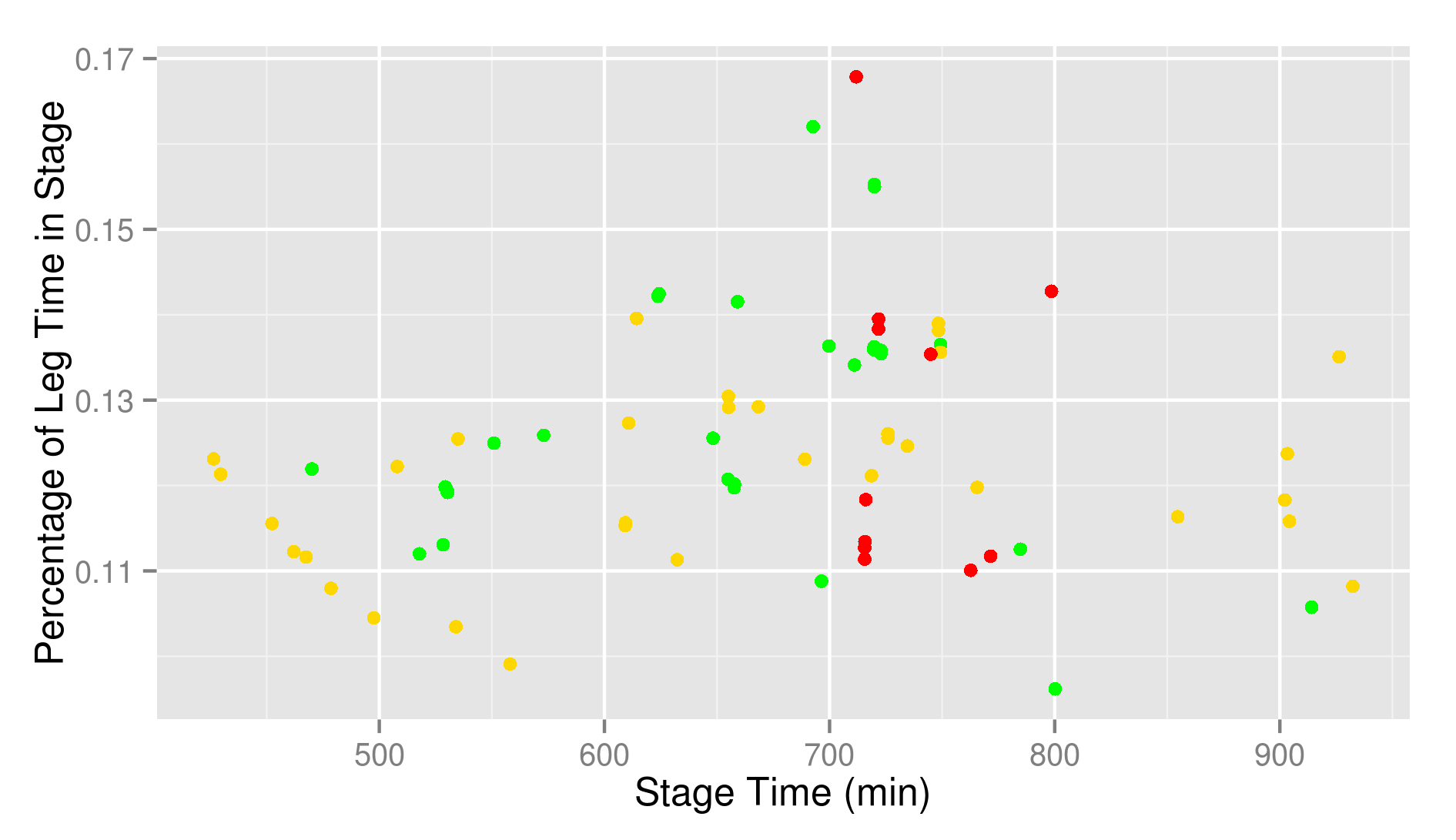 None of the lines are really faster, but it looks like yellow is the most intersting line. On green and red the spread is bigger, so there you run the risk of loosing time.
Secondly, I classified by the point of making the turn. 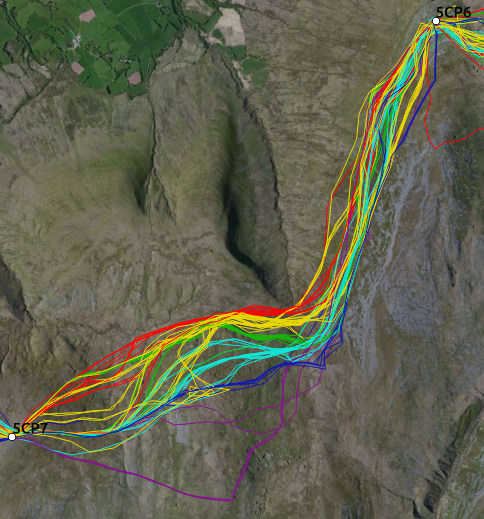 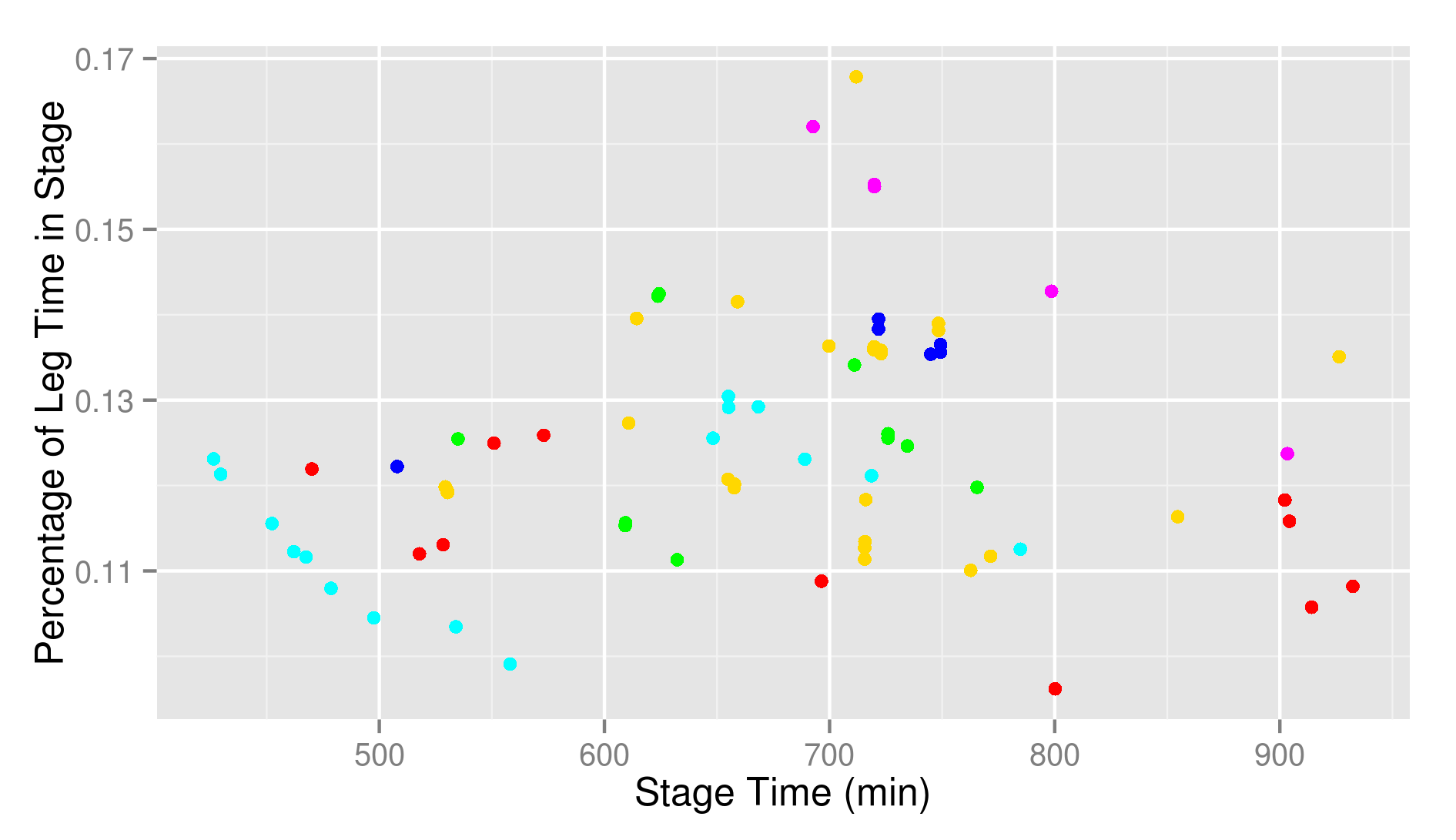 I would say that red, yellow, green and cyan are all fine, but that blue and magenta start to overshoot it.

The fastest time was run by Damian Hall with 24.0 minutes.
The median time was 37.2 minutes.
This is a rather short leg, where you first descend to a road and then shoot for a summit at the other side of the road. This is also without paths, so the lines are not clearly definined. 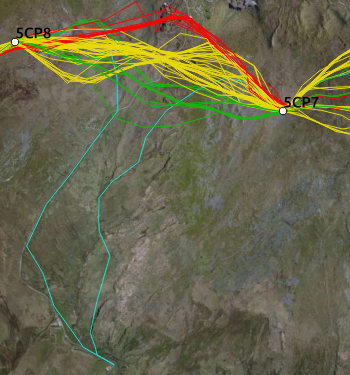 I classified again from north to south in red (15 runners), yellow (49 runners) and green (11 runners). Finally there is Filip who got lost to the south (cyan). 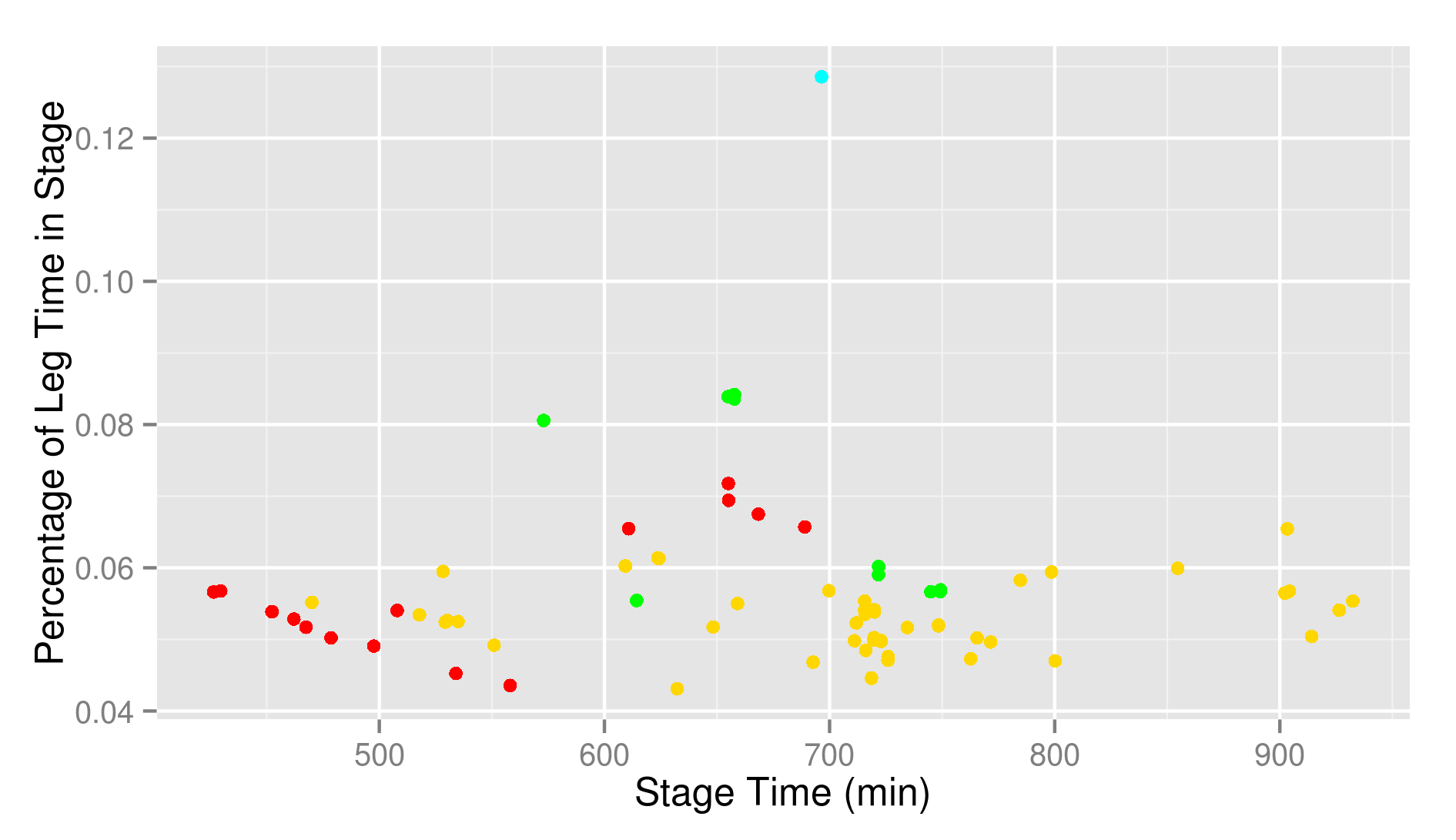 Yellow and red look more or less equivalent. Green is on the high end so a bit slower. And cyan is desastrous. It easily takes twice as long as the other options. But nobody would make that choice on purpose, I think.

The fastest time was run by Charlie Sharpe with 30.3 minutes.
The median time was 48.1 minutes.
Another short leg with no clear path. The trick was following a good line in the fog. 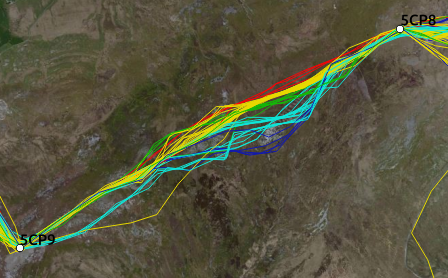 My classification is made at the point where the track spread out the widest. From north to south there are red (4 runners), yellow (41 runners), green (9 runners), cyan (17 runners) and blue (5 runners). 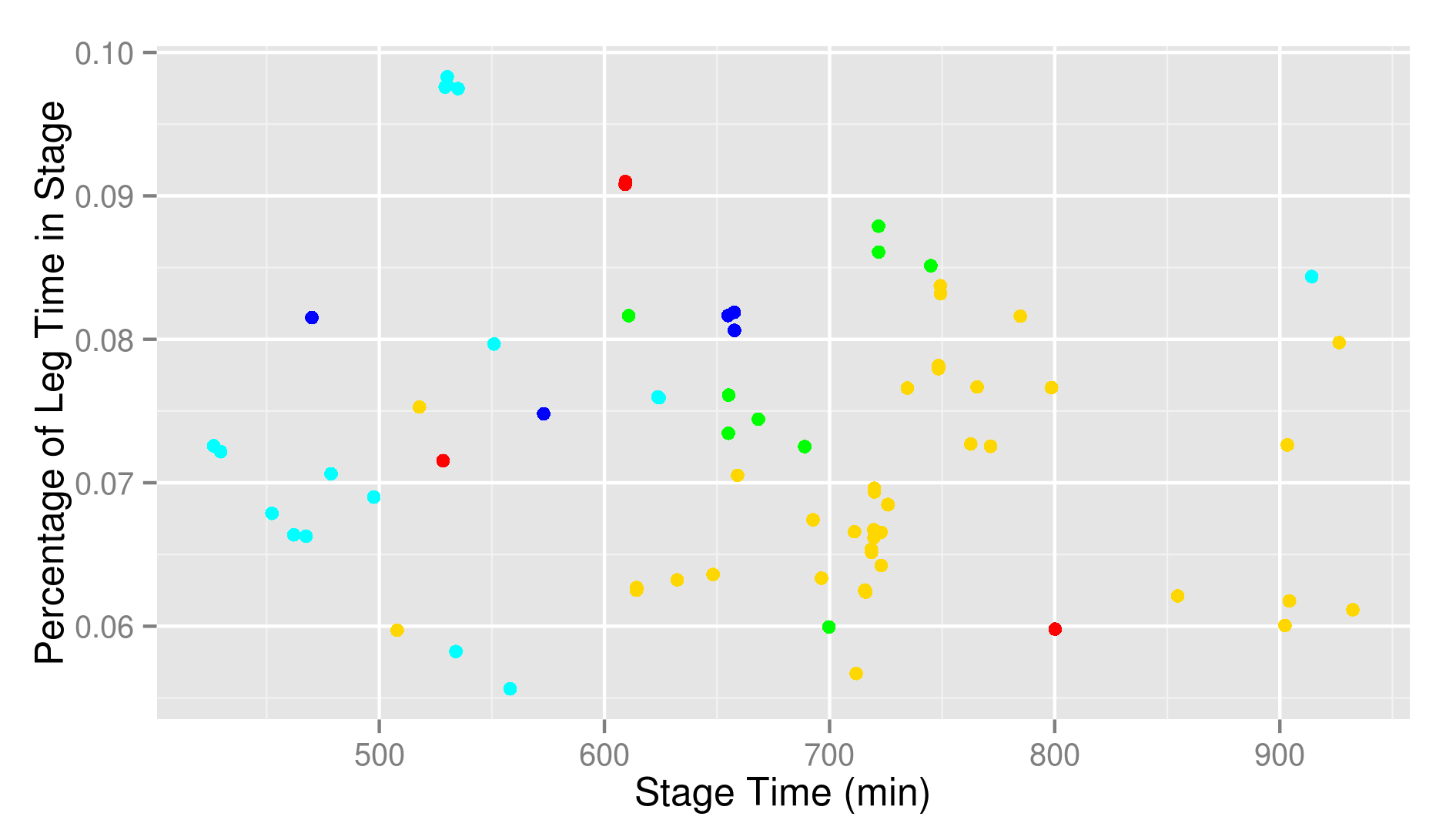 Again, there is no clear winner. The most remarkable is how the faster runners went for cyan, while the second half went rather for yellow-green.

The fastest time was run by Pavel Paloncy with 29.1 minutes.
The median time was 53.2 minutes.
Pavel was here spectacular, running seven minutes faster than any other runner. That is a lot over such a short leg. 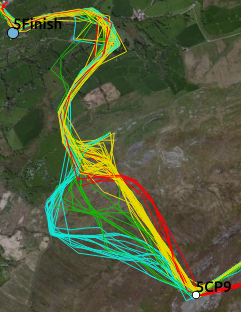 Most (42, yellow) runners took a rather straight line to the final mandatory part. The red line are seven runners that started a bit more to the north. Another popular option was to head straigth for the road and start following that (cyan, 16 runners). Finally, there is green which is a bit between yellow and cyan (12 runners). 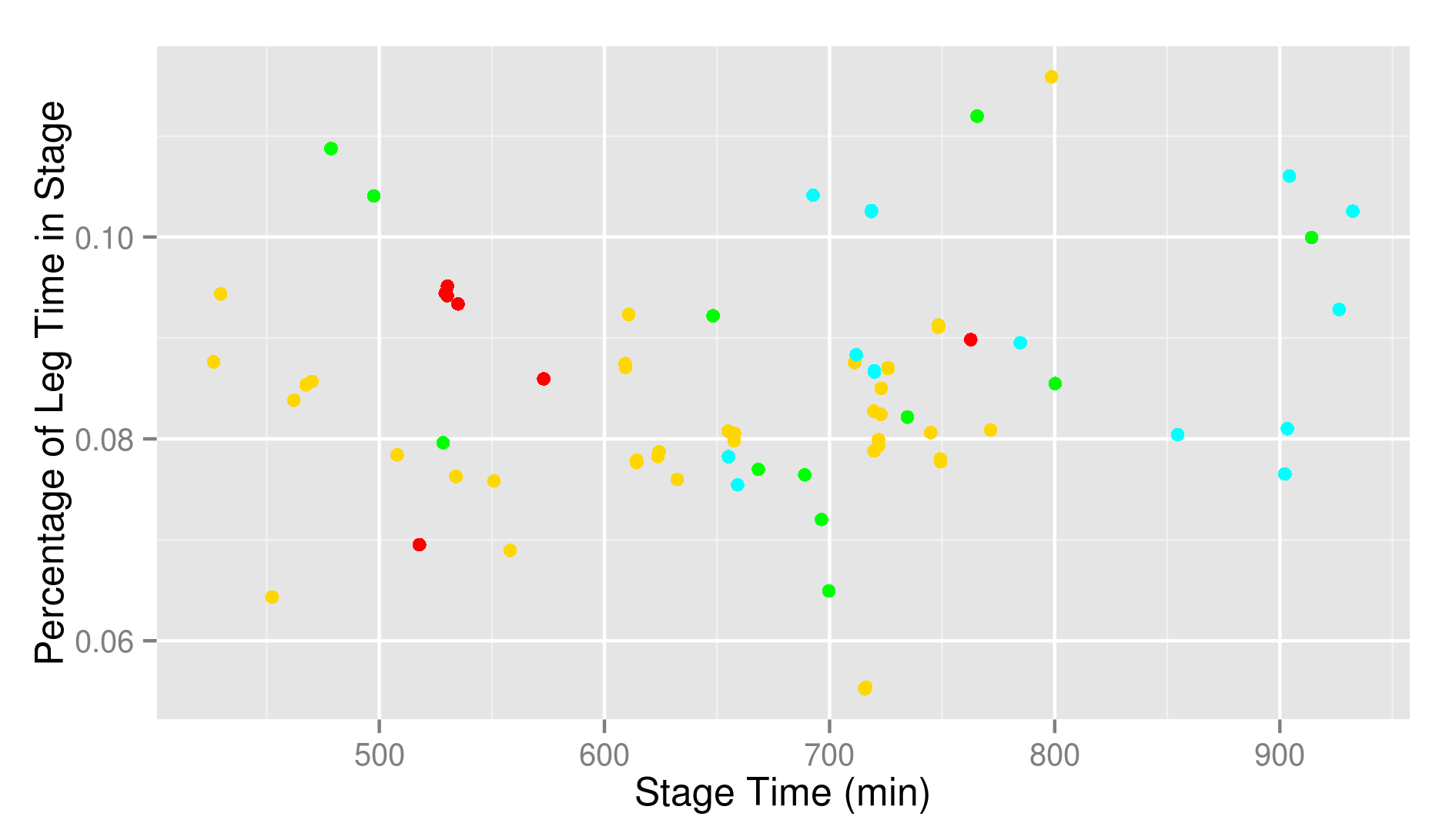 The result is a bit of mixed bag. I think that the result here depends more on the remaining motivating to blast to the finish line, rather than on the route choice made.

So, that was it for the entire race. Now you know how you can kill a dragon in only five days. The most important lesson is that you should avoid getting lost and if it is not obvious from the map which choice is the best, it usually doesn’t matter which one you take.