Every year since 2010, we can follow one of the nicest races to run and also to follow from behind the pc screen: the Tor des Géants. In short, it is a loop around the Valle d’Aosta of 330 kilometers and 24000 meter of vertical gain (and loss).

The fifth edition started a few hours ago. That means we have four editions behind us. And that implies we have some data that we can play with. We can make all kinds of predictions, analyses and records to beat. Let’s see.

Most obvious are the fastest times. Well, this is the top 5 this far:

That is a long time, indeed. The slow runners should get to the finish line in less than 150 hours. Most runners will sleep during the race. There are six basi vita and a lot of smaller aid stations. The time getting in and out of the basi vita is tracked as well. So we can see who spent the least time in those basi vita.

This is limited to people that acutally finished the race.
We can do the same for people that spent the most time in the basi vita, while still finishing the race.

Remarkable. The big sleepers all ran in 2010. And yes, that is a big outlier. But no, it is no mistake. I happen to know the guy and know the story behind it. Well, I am that guy in fact. I think that I will award “The Yeti Trophy” to the finisher that spends the most time in the basi vita. This far the winners of The Yeti Trophy are

I am 7th in this ranking. I blame Renaud for slowing me down.
And the longest time on the course:

Take into account that those people probably just have been sleeping a long time outside the basi vita. And I gave a few more than five, because I know some of the people just outside the top 5.

It is no surprise that the fast finishers spend little time in the basi vita and that the long sleepers tend to finish somewhere in the back.
A scatterplot shows this nicely. 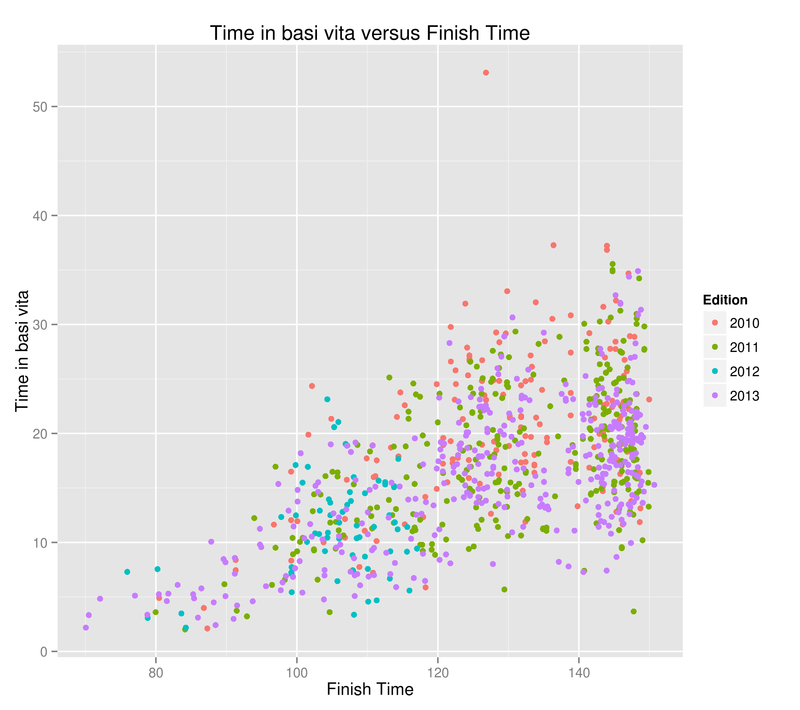 Finally, I would like to take a look how those times are distributed. I made some violin plots for that. Maybe not the most intuitive plots but they show nicely what happens. This is what the distribution of finishing times looks like. 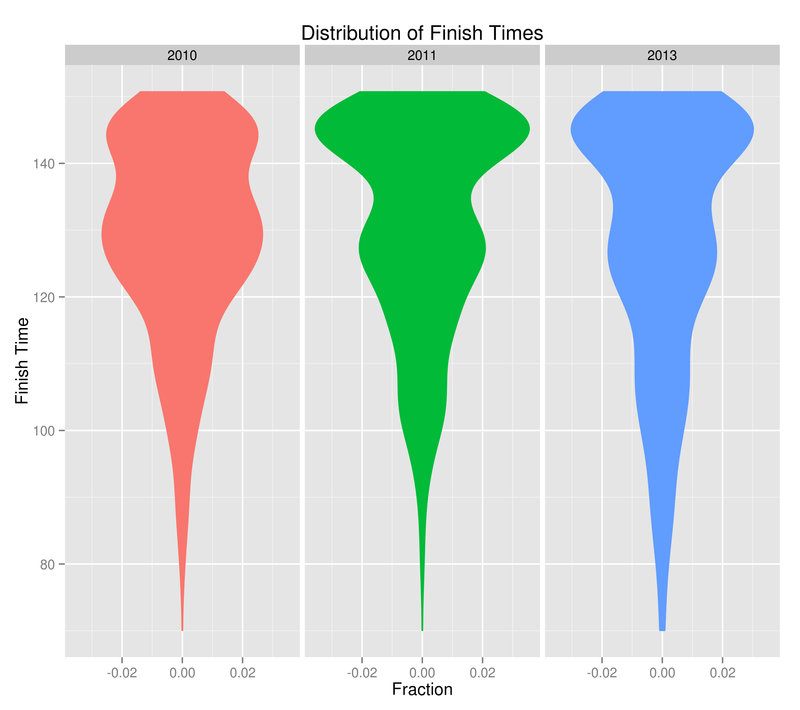 We see that people like to finish around 130 hours and around 145 hours into the race. They avoid to finish 135-140 hours into the race. In fact what we see is that people don’t like finishing at night. Over time we see that the fraction of finishers on day 6 has increased. This is probably not very surprising. What it means is that the increased number of participants (is has approximately doubled since the first edition in 2010) is mainly added in the back of the pack. That is something you see in any running distance. For instance the increasing popularity of marathons has given rise to a huge mass of people finishing in 4-5 hours, while among the front runners, the level hardly changed. We see the same thing happening at the Tor.

And this is what the distribution of sleeping times looks like. 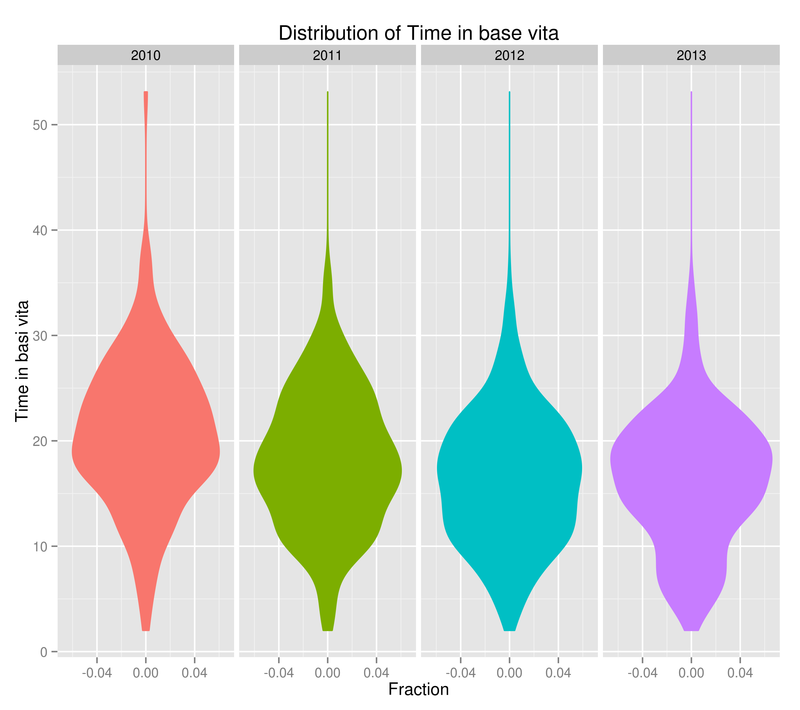 Most people stay a bit less than 20 hours in the basi vita. Like the ranking of long sleepers indicated, the time in the basi vita decreased since 2010. The distribution of 2013 looks interesting. It looks like the people that would normally stay in the basi vita for about 10 hours have been trying to push their time inside further down. I assume that this are competitive runners that have learned from previous editions that sleeping as little as possible is the winning strategy at the Tor. But this is a bit of guessing from my part. Anyone has a better theory?

I did my best to create a so correct dataset as possible, but I am definitely not an official authority for record keeping. Just make a comment if you would catch an error.
For the records of leg 1, I only consider finishers. If a quitter has been better I put that between brackets. The people that were stopped in Saint-Rhemy due to bad weather are considered as finishers, but they are not included when finish times are considered for obvious reasons.
Sometimes an intermediate time is not available due to a glitch of some kind. That messes up some of the calculations. I only included the runners for which all the necessary data points for the calculation at hand are available.
Because the 2014 race is underway as I write this, only 2010-2013 are considered.
Times are every time expressed in hours since the start.